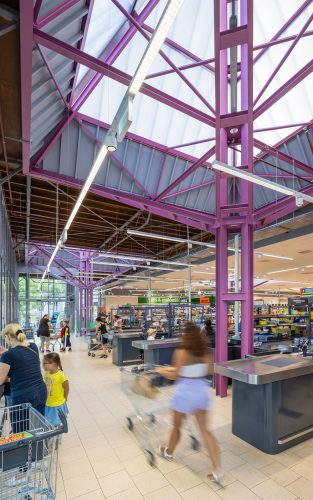 The award is an initiative of professionals with supermarket and real estate backgrounds. Therefor the focus is not just the supermarket but especially the building itself. Because of the daylight which falls through the transparent facades and through the glass pyramids on the roof, the shopping is ‘very pleasant’ according to the jury. The jury is also ‘impressed by this form of sustainability, where the zeitgeist of the early seventies is fully integrated with the requirements of the supermarkets fifty years later. The building has been given a second life’. 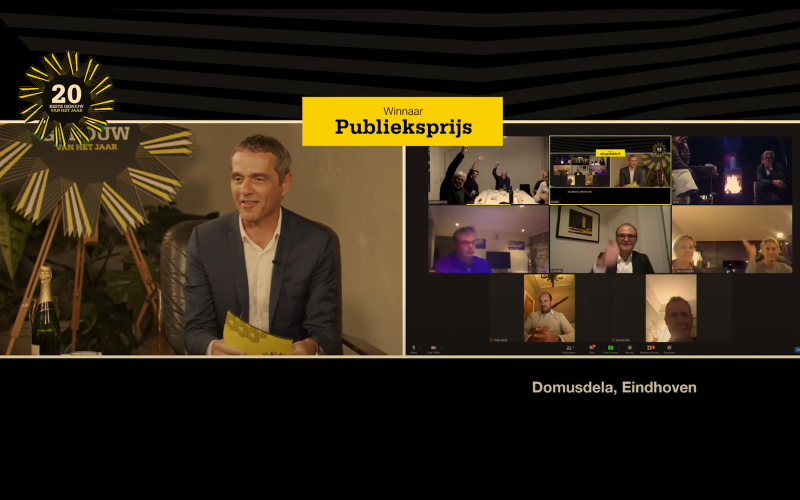 The Dutch Architecture Award of BNA, the association of Dutch Architects, for ‘the building with has the most added value for clients and society’ has been awarded on the 22th of October by way of a festive livestream.

The project DomusDela in Eindhoven was one of the 10 nominated projects, divided over 4 categories. In the category Liveability & Social Cohesion, Mei architects and planners won the prize for the beautiful housing project Fenix 1.

The House of ceremony DomusDela, commissioned by cooperation Dela, however, gained the most votes from the public. Bert Dirrix and Arie van Rangelrooij (architecten EN|EN) together received the Public award from jury chairman Neelie Kroes.

The jury: “We were surprised by the architectonic approach of the building and the innovative program. A functionality which is usually positioned on the outskirts of the town, is placed in the center of the city, combined with social functions and spaces to celebrate. The whole building shows the amount of attention and love the client, the municipality and the designers have given to realize this transformation”.

The winner of the 15th edition of BNA Best Building of the Year is Forum Groningen, designed by NL Architects, commissioned by Groningen minicipality.

An important Dutch Architecture award is the yearly BNA Best Building of the Year award. This award is distributed by the BNA. Not only the architectonical quality, but also the utility value, the perception value and the value added to the community is taken into account. Therefore it is an honor that DomusDela is nominated, out of 103 participants, for this award.

The jury of six, this year led by Neelie Kroes, nominates the buildings which are eligible for the BNA Best Building of the Year. Besides the choice of the national winner by the expert jury, there also is a public award.

On the 22th of October, the winner will be announced in a livestream. 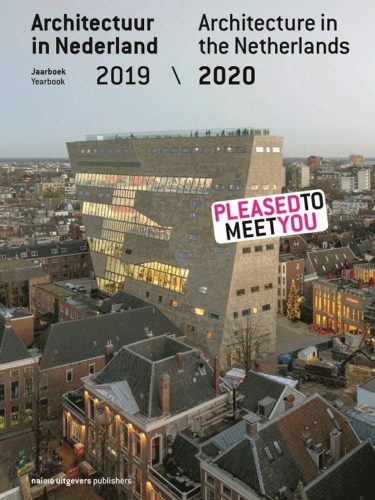 For more than 30 years, the publication Architecture in the Netherlands of NAi010 Publishers, is an indispensable survey for everyone who is interested in Dutch architecture or works in this industry. This year the launch of this book was on the 21th of September in the Nieuwe Luxor Theater in Rotterdam.

The three editors (Kirsten Hannema, Teun van den Ende & Arna Mackic) made a selection of exceptional projects which has been completed in the last year. They describe the most important developments which influences the Dutch architecture.

This year the coordinating theme is: Pleased to meet you, an invitation to start a conversation with each other, to listen to and connect with other people, and to see architecture as a joint project.

The House of ceremony DomusDela in Eindhoven, fits perfectly in the theme Pleased to meet you. The new functionality of the previous monastery and the new transparency adds a public space and a contemporary meeting spot to the city. A public stage which invites a broad program ranging from funeral and marriage ceremonies to concerts, cultural activities and party’s. DomusDela is a new focus of architectural, city planning, cultural and social connection on the intersection of present and history. With this complete new dynamics, an important urban hotspot is added to Eindhoven.

The book Architecture in the Netherlands Yearbook 2019/2020 can be ordered  through this link. 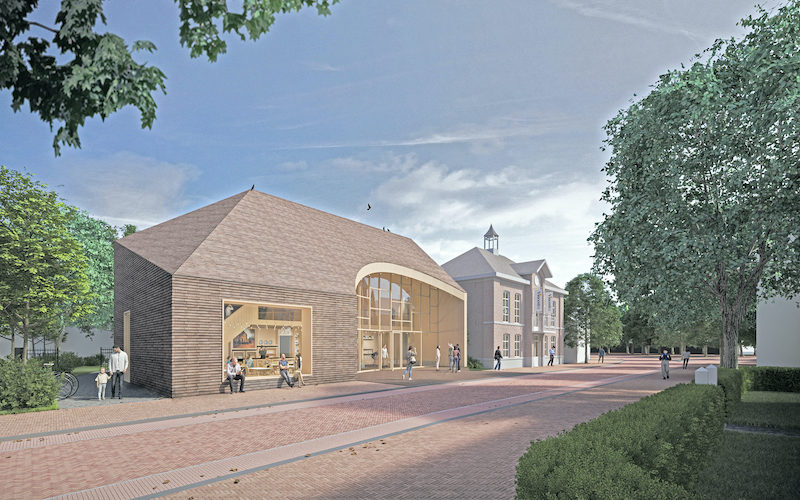 Today Vincentre presented the sketch design for the expansion of the museum in Nuenen. The design is inspired by the typical architectural style of farms from the time that Vincent van Gogh lived and worked in Nuenen. The expansion of Museum Vincentre is possible thanks to contributions from the municipality of Nuenen, the province of North Brabant, the Deal Brainport Eindhoven region, regional business, funds and private individuals.

“The new building has a homely character and symbolizes the painter’s predilection for ordinary honest life, which is also reflected in his landscapes and portraits.” (architect Rob Meurders)

The existing building will be enriched and expanded with a striking new volume. The location on the historic ribbon thus becomes even more the anchorage from which the heritage sites from the time of Vincent can be discovered. The village and Brabant, with its typical scale, is of great importance in the design. Not through a literal imitation of the style from that period, but through an expressive and contemporary version of a long-cut farm, the relationship between the artist and his former home is revived.

Museum Vincentre and the Van Gogh Village Nuenen foundation are part of the Van Gogh Sites Foundation, the Brabant-wide collaboration between parties that work under the banner of Van Gogh Brabant for the preservation and development of Brabant’s Van Gogh heritage. The development of the heritage in Nuenen will contribute to the attractiveness of the region for residents, entrepreneurs and visitors. 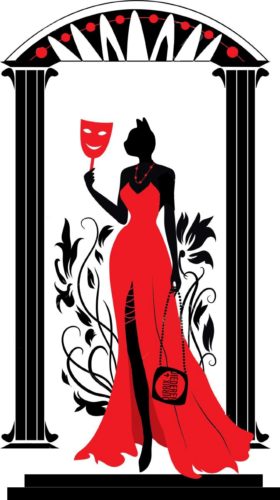 Diederendirrix architects have been selected to create an extension and revitalize theater de Kattendans. This is once more an inspiring challenge for an important cultural building in Bergeijk after our succesfull repurposing of the previous weaving mill De Ploeg.

Infinite options are possible between preservation and a complete make-over of a building. We are going to deploy all our knowledge and creativity to find the best balance between repair, repurpose, restructure and/or regenerate the existing theater.

In cooperation with  bureau Franken, K+ adviesgroep en Vianen Bouwadvies,  we will create a new cultural centre with more space and service for both the visitors and the theater makers. At the same time, we cherish the current intimacy of the building. 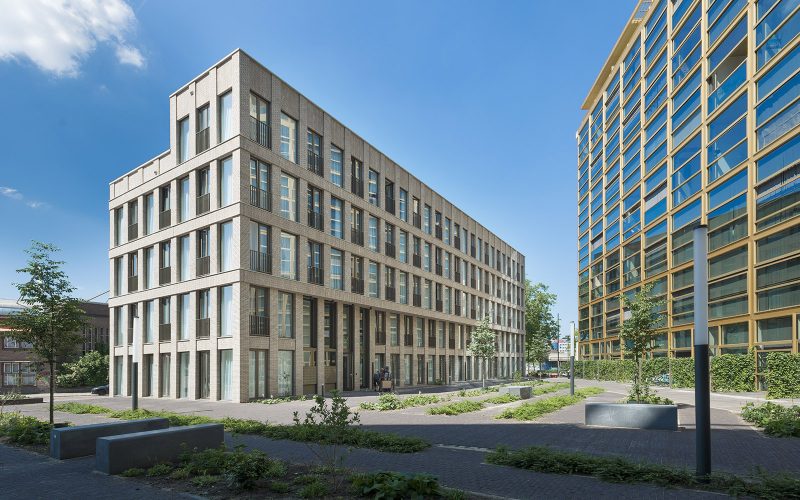 The jury nominated 10 projects for the Reynaers Project prize 2018 including Victoria Court. The public decides the winner. Please vote for Victoria Court on the website of Reynaers.

The residential block Victoria Court forms part of the transformation of the Emmasingel quadrant in the city centre of Eindhoven. Victoria Court has been completed in March 2018. The Victoria Court program compromises 43 apartments with commercial space in the plinth. The urban development plan for this project was designed by West 8. Diederendirrix is also involved here on other architectural projects, including Philips Lighting and the Onyx residential building.

More information about this project and the nomination on Reynaers Project prize.

Check out the project video of Victoria Court on Youtube. 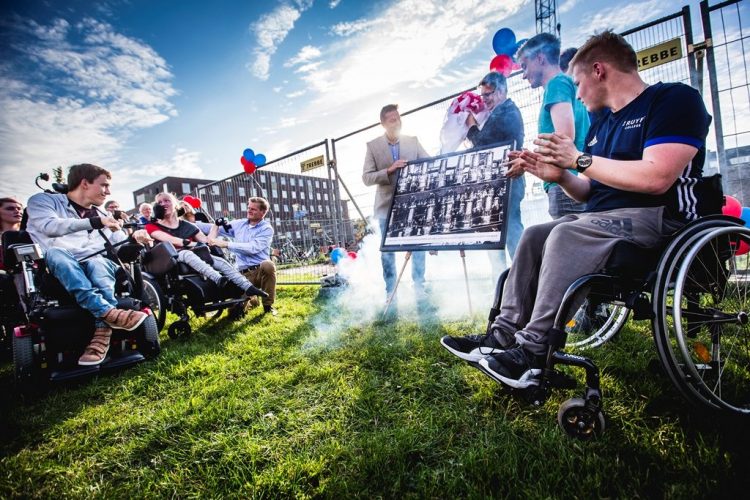 Client Nijestee has started the construction of a fourth residential block in the Gruno district in Groningen: Lampisterie. 101 social housing units will be built in the building, including 15 homes for young people with a physical disability. On Tuesday 16 October, the official start of the construction took place in the presence of a number of future residents, stakeholders, local residents and alderman Roeland van der Schaaf.

Lampisterie comes between the Paterswoldseweg and the Grunostraat. In the building there will be two, three and four-room apartments, maisonettes and apartments for young people with physical disabilities, together with a common room and a space for the care provider. All apartments are covered by social rent. Diederendirrix has designed all homes to be earthquake-resistant, energy-efficient and gas-free.

Contractor Trebbe will carry out the construction. Antje de Groot, director of Trebbe Bouw: “This project is already an example of good cooperation for us. During the preparation it was really give and take to make the project feasible in time and money. I am proud that it was once again successful in Groningen. ”

The design of the building also takes into account the housing of animals: forty nest boxes for common swifts, fourteen for house sparrows and fifteen for bats.

The official start of the construction was accompanied by the unveiling of a canvas with an image of a lampisterie, the place where (train) lamps used to be kept, cleaned, filled and take out. The canvas is a gift to the future residents and is given a central place in the building. All names of the new residential buildings in the Gruno district have a link with trains. In the past, railway employees used to live in the neighborhood.

On Friday 24 August 2018 diederendirrix organised a guided tour of the building previously occupied by the Technische Dienst in Eindhoven. The TD building is currently being transformed into a residential development, comprising 157 residential units, a restaurant and office space. The conversion is in full swing and this was indeed an excellent opportunity to invite a number of our contacts and a group from the municipality of Eindhoven to join the tour. Completion is close!

At 3.30 p.m. Dirk Vervoordeldonk, construction supervisor at Stam + De Koning, welcomed the group on the construction site. Paul Diederen gave a brief presentation and afterwards the group visited a number of floors. The enormous penthouse on the 11th floor has a stunning view over Eindhoven. This also applies to the other floors.

The tour concluded with drinks at the neighbouring Stads café/restaurant. 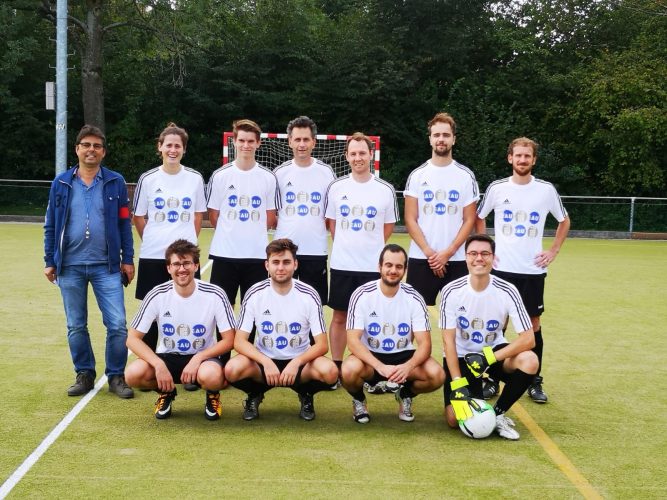 Following the successful Archicups in the Randstad urban conurbation, it was high time that this event was also held in Eindhoven, according to Christopher Ho (diederendirrix architectuur & stedenbouw) and Theo van Hoeve (Pauwert Architectuur). With no fewer than twelve competing teams comprising Eindhoven and/or Brabant based architects, this first event was a great success.

The teams assembled on Thursday 30 August at the students’ sports centre at TU/e where the players kicked off at 3.30 p.m. The teams were divided into pools with each team playing a minimum of two matches. The winning team in each pool went through to the semi-finals. The teams were spurred on by colleagues, family and friends.

The teams fought hard for the coveted trophy in this first event! Finally, following a thrilling contest, Architect Direct from Mierlo went home with the cup.

The final kicked off was at 7.30 p.m. and the younger team, Architect Direct proved too strong for diederendirrix with 5-0. The winner triumphantly received the first trophy cup, as well as the Fatboy Lamzac.This event was made possible in part by: TU/Eindhoven, the organisation (Christopher Ho and Theo van Hoeve) and principal sponsor Fatboy Lamzac.

It was an entertaining, sunny and sport-filled day and after the football there was of course no lack of food, drinks and music.