Architecture builds upon history. Even the avant-gardist creed to ‘make it new’ still assumes a past. It is impossible to imagine novelty without an awareness of what existed before. In their transformation projects, diederendirrix retell stories of buildings and sites- by paraphrasing parts of the story, by recasting central actors, by making architecture speak in other words. By doing that, they make it anew.

In their transformation projects diederendirrix re-tell stories about buildings and locations. By paraphrasing parts of the story, by repositioning key factors and speaking about architecture using different words, they make it anew.

In the new publication Make it Anew, Paul Diederen and Bert Dirrix, together with Hans Ibelings, describe the work process of the bureau during the renovation, regeneration, restructuring and repurposing of existing buildings.

On Friday 1 June, during the festive book presentation, the first copy will be handed to Government Architect Floris Alkemade at Kazerne in Eindhoven. 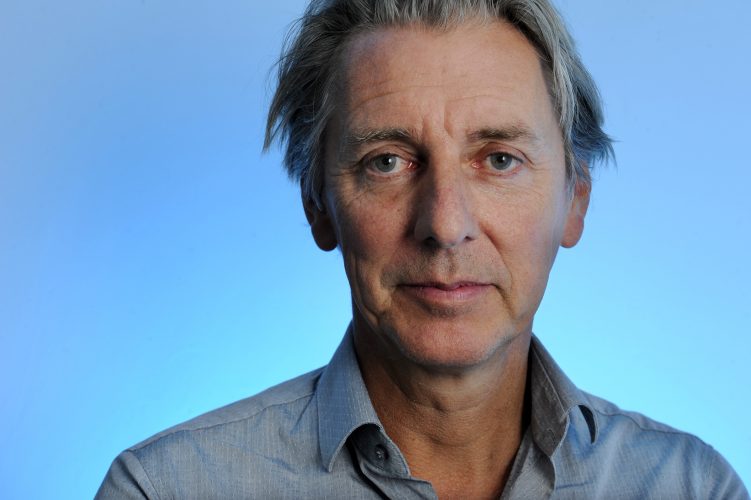 On 1 June 2016, Professor Paul Diederen was appointed as part-time Professor of Transformational Design at the Architectural Urban Design & Engineering Department of the Faculty of Building at the Eindhoven University of Technology. On Friday 1 June 2018 he will give his inaugural speech, entitled ‘Designing change/The Design of change/Designing for change’.

The future of the city already exists. It is the city in which we are currently living, learning, working and playing. The innovation of this city requires a nuanced framework of ideas and practical approach. The shock doctrine of tabula rasa is replaced by an adaptive city. Renovation, conversion and the re-use of the existing building stock and the further densification of the city is a continuous process in this approach.

In his inaugural speech Paul Diederen talks about what inspires him as an architect. He describes his vision for the re-use of the post-war construction environment and outlines the spearhead of his research and teaching: how the strength of the existing context is the guide to a new future. 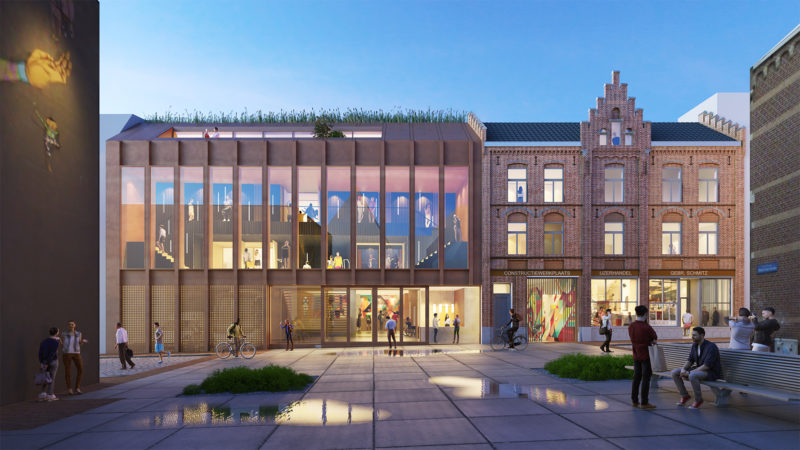 On Friday 9 March 2018 during an official press meeting the spokesperson announced that diederendirrix will design the expansion of the NIEUWE NOR pop venue. The expansion includes a new hall that will soon accommodate some 700 visitors to pop concerts, dance events and other performances. This so-called “central hall” complements the city’s existing club circuit and is an important new link in the transition of new local talent to increasingly large venues. The new hall will be connected to the existing building by means of a new transparent foyer overlooking Schelmenhofje. By means of a shared, flexible cloakroom the individual spaces can be used both separately as well as in a festival configuration. The café functions as an independent unit. The upper floor of the existing building will be used as changing rooms and recreational/social amenities for artists and crew, deliveries are resolved internally. In the Nieuwe Nor the activities, dynamics and movements of the concert goers are visible from the street. It becomes a scintillating building and an exciting addition to the street scene, to the cultural experience, and to the city. The winning draft design was selected by a committee comprising the municipality of Heerlen, IBA Parkstad and the NIEUWE NOR pop venue. The design was chosen unanimously.

The former town hall of Almelo is a remarkable building in several respects. It is the final design in the impressive oeuvre of architect Jacobus Johannes Pieter Oud. It was designed in 1965 and, after the death of the architect, was further elaborated and built by his son − H.E. Oud – who described the building as “poetic functionalism”.

It is interesting to note that the building was originally designed for another location in Almelo. Following a period of discussion concerning the urban and traffic management structure when extending the city, the design, practically unaltered, was built on the former Gebr. Palthe industrial estate. Except for modifications in the interior, it remains a highly original building but structurally in very bad condition. The building can be conceived as a compilation of three striking volumes on a raised plinth. The slender, transparent curtain wall of the main volume represents an open, democratic relationship between the civil service and citizens. The high elevation and overall volume present opportunities for the incorporation of an extraordinary, new living environment.

For more than thirty years the town hall was one of the city’s most important public buildings: the people of Almelo visited it, worked in it, attended meetings and waited, complained, married and celebrated there. The transformation of this splendid building is an opportunity to preserve its exceptional quality, and to utilise it for a new, extraordinary living environment that does justice to the original design.

The renovation of Weverij De Ploeg – a national monument – has been nominated for the AR New into Old awards. This award is an initiative of The Architectural Review, a renowned English architecture journal, that recently celebrated its120th anniversary. The AR New into Old awards is a new prize in the field of renovation and transformation. The internationally selected projects were chosen on the basis of their successful transformation of the original architecture into contemporary functions, with diverse strategies leading to inspiring reutilisation.

The renovation of De Ploeg by diederendirrix architectuur & stedenbouw gained recognition yet again, when the project was also awarded the Pieter van Vollenhoven prize on 1 December 2017. This annual award is presented to an organisation or person that was the most successful in giving a historic building a new function.

A member of the AR New into Old awards jury flew over from London to visit Rietveld’s monument and assess the quality of the De Ploeg renovation. Special arrangements were also made to have a photographer for the award. Project architect Rob Meurders and Jan Burgmans, the client and director of Bruns, arranged a tour of De Ploeg and were then interviewed by the jury member.

The projects nominated for the AR New into Old awards, as well as the announcement of the winner, will be published in the December/January issue of The Architectural Review. Incidentally, this will probably be one of the last paper editions of the journal because, according to reports, there are plans to publish The Architectural Review in digital form in future. 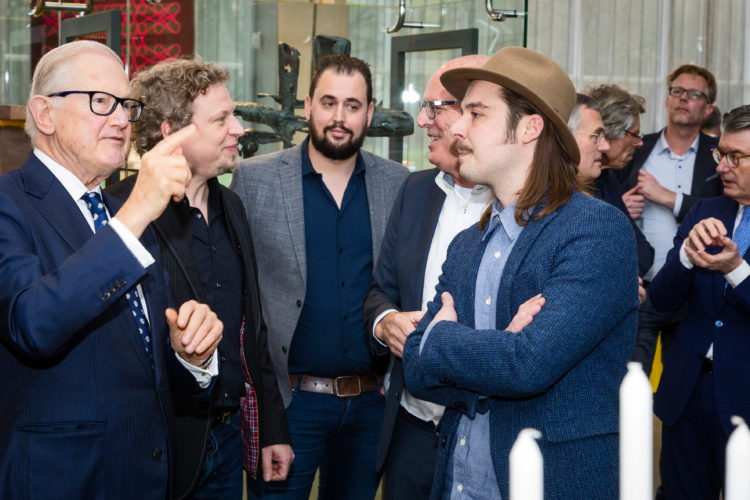 Until recently, Pieter van Vollenhoven had not heard of Weverij de Ploeg in Bergeijk. His wife, however, had. ‘Yes’, she said immediately, ‘it’s an impressive building by Rietveld. With a wonderful philosophy too. That building is a celebration. And the park that’s around it. Fantastic.’ Van Vollenhoven found the award of the prize was justly deserved. ‘De Ploeg was a creative company and Bruns is that, too. Wonderful that a similar type of company is occupying the building again, that was why it was created. This is very different from a church that’s converted into a hotel.’

Van Vollenhoven listened with interest to a detailed description of the restoration of the factory building by Rob Meurders of diederendirrix and interior designer Aart van Asseldonk (wearing a hat in the photo). As joint initiative-taker for the renovation, Rob Meurders also deserves a place in the spotlight because, after Bruns purchased the building, he approached director Jan Burgmans and convinced him to renovate the factory true to style. The Pieter van Vollenhoven prize is therefore also proof of a successful partnership between client and architect.

Diederendirrix, in combination with Exaedes (project management), Ynno (the New Work concept consultant), K-plus adviseurs (installation technology and construction physics) and Van de Laar (construction), has won the tender for the renovation of the offices of the municipality of Sittard-Geleen.

The commission arises from the municipality of Sittard-Geleen’s decision to accommodate the managerial centre − Mayor and Aldermen, Council, and Registry − in Sittard and the administrative organisation in Geleen. For this purpose the present Stadswinkel in Geleen will be renovated and a new-build expansion will also be added. In total this involves approximately 8,500 m² of office space.

The project forms part of the city centre concept in which the new municipal offices become a landmark in their surroundings. The building will be made more sustainable and will be strategically extended, whereby the municipal offices will fulfil a future-proof role in the city council and the centre of Geleen.

The implementation of the new office concept also contributes to this goal. The municipal offices will be converted to accommodate the New Work concept. To that end the office environment will be transformed into a modern, flexible work environment tailored to facilitate meeting, collaboration and activity-related work.

On Wednesday 25 October this year, during the Dutch Design Week, the official launch took place of the Result Chair and Pyramid Collection in the former mill, De Ploeg, in Bergeijk. After some sixty years the well-known Dutch Result Chair, designed by Friso Kramer and Wim Rietveld, has been re-launched on the market by the Danish furniture producer HAY, in collaboration with the Dutch manufacturer Ahrend.

Arnold Struik, Marketing and Innovation Director at Ahrend, opened the event with a special word of welcome for Friso Kramer, who has now reached the venerable age of 95. Rolf Hay, founder of Hay, then summarised for those present how the redesign of the Result Chair had come about. Hay, together with Ahrend, has adapted the chair whereby the new Result Chair is functional, accessible and affordable for everyone. The industrial character of the chair in particular is what makes it outstanding and entirely in keeping with the Hay philosophy.

The presentation took place in an exceptional location, which everyone found deeply impressive. The former mill where the Ploeg fabrics were produced was designed by Gerrit Rietveld and forms a single entity with the equally impressive Ploegpark, designed by Mien Ruys. As from this year the factory building is being used by exhibition developer Bruns, following the renovation of the building by diederendirrix – and its redesign together with product designer Aart van Asseldonk. In this context, architects Paul Diederen and Rob Meurders from diederendirrix gave a brief explanation of the transformation of buildings and the renovation of Weverij De Ploeg, followed by a tour of the building. The evening concluded with informal drinks.

At the beginning of this year, which revolves around De Stijl, the renovation of the only factory Rietveld ever designed, was completed and a new visitor centre was opened in Bergeijk. Former weaving mill De Ploeg and its surrounding park is one of the top 100 listed buildings from the post-war period (1940-1958). There are many parallels between the renovation process and the original construction process and founders’ philosophy.

De Ploeg started as a cooperative weaving mill and textile business in the 1920s. In the early 1950s, the company – by then renowned for its modern interior and fashion fabrics – wanted a new factory building with a wide span, a flexible floor plan, and plenty of good light to ensure the manufacturing of fabrics with consistent colour properties.

Read the full article in ArchitectuurNL

The jury of The Rietveld Award 2017, led by architect Jacq. de Brouwer, has announced the projects nominated for The Rietveld Award 2017, an architecture award which aims to stimulate the quality of the built environment of the city of Utrecht. The former office building on the Nijenoord in Utrecht is one of the nominated projects. The building dates from the 1960s and was the office of Jeugdzorg [Bureau for Youth Care] and has been drastically transformed. In the existing situation, the building – built in several phases – looks extremely incoherent and messy. The new façade has a grid of regular brick bond filled with light-coloured bricks and gold aluminium sliding doors. This gives the building a fresh look, matching its new residential function. Subtle details such as brick soldier courses above and below the façade openings and a reveal of alternating depth contribute to the building’s sophisticated look.

Visit rietveldprijs.nl to read more about the nominated projects