De Nieuwe Nor is a unique institution with a remarkable history, an impressive list of activities for a diverse selection of visitors, and an exceptionally active club of volunteers. The stage is the basis for the development and spread of musical talent in the Pinkpop region, and is making its mark on the city’s culture. The expansion, including a large hall with an increase in capacity from 350 to 1200 concert visitors, is part of the impressive future vision. An exceptional task designed to link the past to today and to tomorrow.

The expansion’s location is rich in history. The spatial structure of the street dates to the Middle Ages and follows the course of the former city canal. The existing premises of De Nieuwe Nor, a former hardware retailer and workshop, are richly ornamented and trace their roots back to the glory years of the mining industry. Two adjacent buildings were demolished to leave space for the stage’s expansion, with a new hall and associated facilities.

Heerlen city centre is under development, with an alternation between historical and raw locations. This provides space for a new level of awareness, while at the same time challenging experimentation and the contemporary experience. De Nieuwe Nor is situated almost at the crossroads of two urban structures of significance for the development. There are a several intimate squares that form a spatial sequence from north to south, while an ‘urban catwalk’ connects the centre along the east-west axis.

At the heart of Heerlen, the interiors of special public buildings act as an extension to the public space. Pancratiuskerk, the Glaspaleis, and the Savelbergklooster are important national monuments nearby. With the spaciousness of their interiors and their public accessibility, these buildings are part of the collective memory of the city. The expansion of De Nieuwe Nor represents an additional building amongst the collection.

The façade as a fluid phenomenon

The appearance of De Nieuwe Nor is a primary experience to sharpen the senses and provide space for the collective experience, inside as well as out. A powerful and distinctive urban sculpture is a strong façade that has the capability to respond like a living organism to its environment, whilst also maintaining respect for the richness of the past. It’s a fluid, moving phenomenon that affords meaning to the location, quite independent of the activities inside.

The architecture is capable of concealing the music stage when there’s no show planned – at the same time, it’s an urban attraction whenever there’s an event inside. It’s architecture that inspires and facilitates the local area during the day, but comes alive for music in the evenings, arousing the curiosity of passers-by to the mysterious events inside. At the same time, the type of music being played inside is betrayed by the façade – rugged, unconventional, dark, rhythmic, exciting and timeless. A building designed for this ‘subculture’ needs to demonstrate that everything can withstand a few knocks.

The new main entrance not only connects old buildings to new but also signposts the clear routing through the building to the two halls and café. The building is designed to allow visitors to navigate their way easily. Stairs guide concert goers in a flowing line through the individual foyer areas in front of the main hall and the two balconies. A strategically located lift serves all floors.

Behind the scenes, every performance begins with logistics. When a touring band arrives after a tiring bus journey, utmost effectiveness and efficiency are the order of the day. Rooms are arranged to ensure that equipment can be moved from the bus to the stage with ease and speed. Vehicles can load and unload safely in a dry and sheltered location. The dressing rooms are well equipped and have a favourable spatial relationship with the stage.

At the heart of the project is human contact. Interaction amongst the audience and between the audience and the band is a key consideration when it comes to music stages. The new building perfectly facilitates and encourages these rituals. A concert in De Nieuwe Nor is a ceremony that brings people together to show, make, maintain, and celebrate their shared life worlds and culture.

This is why the lines of sight to the stage have been optimized. The crux of a concert is always being able to experience it, and the same goes for the musicians and crew. A moving audience has a positive impact on the band’s performance. Our design for the main hall affirms this interaction, which is why we opted for width over depth to help support the experience and intensity. This also supports the acoustics, with the audience as close as possible to the artists or DJ. It adds an intimate quality that acts as a distinguishing factor for the hall. The large balconies run along both the side and rear walls of the entire hall. With small elevations, seated members of the audience have an improved experience with a perfect view of the stage.

The mural shown on the first photograph is called: O Estrangeiro, which is Portuguese for The Stranger. This mural from 2008 in the Schelmenhofje is by the Brazilian artists Otávio & Gustavo Pandolfo. The brothers work together under the stage name OSGEMEOS. 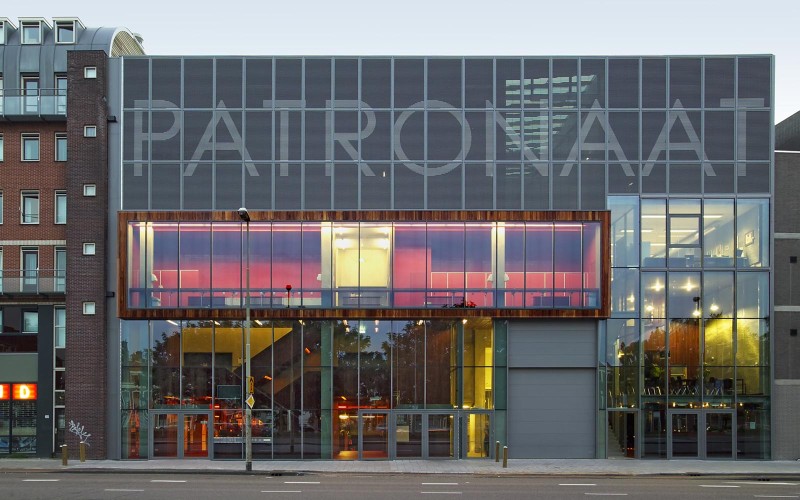