Aart van Asseldonk, together with diederendirrix, was responsible for the interior design during the renovation of Weverij De Ploeg in Bergeik. Aart was inspired by the architecture of Gerrit Rietveld, the designer of De Ploeg: “I immersed myself totally in this project and once again fell in love with De Stijl and Rietvelds’ work. I really enjoyed transporting myself back to the spirit of the age. How Rietveld at the time made those decisions. That’s extremely interesting to see and then to map out my own plan on that basis. A project like this really inspires you to do your very best. There’s so much history involved. Really amazing that, as a youngster, you can start sketching in the drawings – and fantastic to work on them. And then as soon as it’s finished the whole world has something to say about it …”

Aart is delighted that the client − Bruns − gave him the opportunity of designing the interior. “In the design world everyone wanted the commission. These are the most interesting projects”. He received the commission through the exhibition of his work at the Dutch Design Week, a Breughelian tableau in the Paterskerk church, and ended up talking to Jan Burgmans, Director of Bruns. “Rather cunningly I managed to arrange an appointment with Jan and he then invited me for De Ploeg. Diederendirrix was already involved in the project. I joined the team one week later. At the time Rob Meurders had already been working on the project for several months.”

For Aart, who studied product design in Arnhem, this was his first major interior assignment. “I wasn’t yet experienced in interior design, but I do have a good sense of form and materialisation. What’s more, my method of working fits in well with Jan Burgmans. We share the same love of material and handmade designs. I was really lucky that Jan allowed me a free hand to do as I wanted with the design of the interior.” During the assignment Aart worked closely with project architect Rob Meurders and architect Thorsten Schneider. ”The collaboration between Rob, Thorsten and myself was very important. It was a pleasant collaboration and we got along well.” Both Aart and Rob had to adjust their ideas on occasion. “You first imagine what you plan to do but when putting it into practice, you sometimes have to acknowledge that there are other possible solutions. That was the game – negotiating these points with Rob, Thorsten, the client Bruns, and the contractor Aqualon. The construction meetings were extremely important in this context.”

Aart studied and reused many of the building’s details. Some of them are not conspicuous , but that does not apply to the characteristic linear pattern of the exterior wall and the striking outer doors, which Rietveld decorated with a pattern derived from De Stijl. Aart also used this façade pattern in the wooden interior walls, but in a style entirely his own. “This façade is very significant. It’s the building’s most frequently-photographed façade. I turned the pattern around and started playing with the grid. I also blew everything up and made it thicker. This has produced a new, unique form that people recognise. In order to obtain this form I printed out a large number of views and then started sketching in them. I turned the plates in an alternating pattern to study the effect of the light. There’s a high level of furniture quality in the wooden walls. If an interior contractor had devised this the smaller details wouldn’t have received so much attention. Bruns is also really good with details. In this respect it was a match made in heaven.“

Aart, however, is not only interested in details, he also makes grand gestures. The spatial dimensionality of the building is excellently suited to this. “Bruns first had small spaces and they needed one large space, an open-plan office. This required grand expressions not small, unattractive bits and pieces.” One of these grand expressions is the air-conditioning system − an autonomous element − suspended in the space. “I worried about the installationsplit. right from day one. The end result is super and really individual. It matches Bruns and the building perfectly.” And it totally carries Aarts’ signature. “We worked very well together and it was one of the biggest challenges in the project. We went really deep. The installers ended up saying ‘there’s that man again – the one with the hat’. It was a great game!”

The design of the canteen also posed an unusual challenge whereby Aart drew his inspiration from the furniture designs, of Rietveld, among others. The large lamps, the green wall, the seating and the industrial kitchen design. “You can find multiple influences in the canteen, which is a bit like swearing in church. I wanted to create the Dudok feeling.” But the height of the canteen really proved problematic in creating that atmosphere. “The building is high everywhere and yet you still want to feel you can sit comfortably with a large group of people. But the ceiling is very high and that feels uncomfortable. So we were busy with the lighting. I made several suggestions for factory lamps, at any rate my own interpretation of them. This finally resulted in large wooden lamps, which had the integral refinement that they’re made of wood. But making such huge lamps is nevertheless another reference to Bruns: playing with the proportions and the space. And we wanted to make a BIG statement.” Aart is very pleased with the design of the canteen and the kitchen. “Also with the furnishings made by Lensvelt, and the entire colour choice works extremely well. Somehow you want to create the feeling that they’re all individual seats in the middle of a compartment. I think I’ve managed to make this work well.” 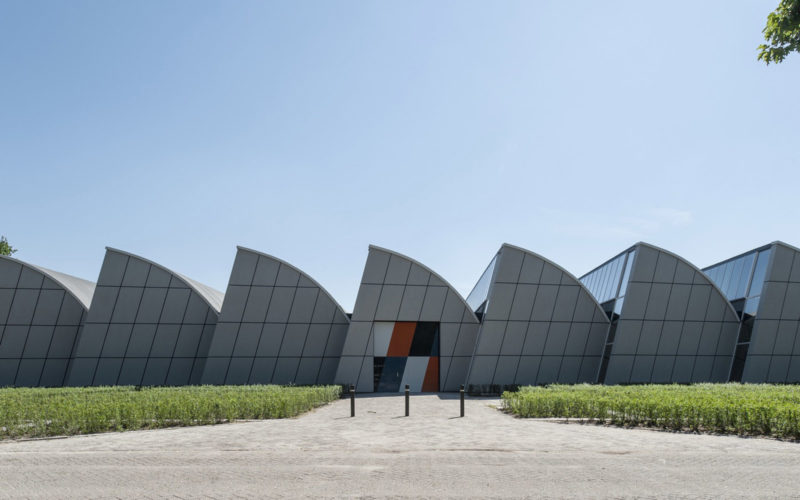